The Only Show in Town

The reason I made the doc initially was because ever since I left SNL in 1992 people ask me, everywhere I go, “Whatever Happened to You?” I thought that instead of spending two hours answering each stranger and friend, I could simply say, “Watch the movie!”

I hope you enjoy it. My story is simultaneously cliche and unique, just like yours. It’s all about love.

A former TV star finds herself trapped in the Miami suburbs with two kids, no career and lots of time to kill. She looks at her scrapbooks to relive her prime and figure out how she got here. Although she adores her family, as we can see from her home movies chronicling every moment of their lives, she misses her career. One day the phone rings and Saturday Night Live former cast mate Kevin Nealon asks her to “open” for him in Las Vegas. She realizes this could be her solution. She could be the perfect wife and mother twenty six days a month and then one weekend a month go out of town and perform stand up, thus quenching her thirst to perform, stimulate her creative juices and make some money. Her divorce from her first husband, the fire-eater, left her pretty broke. She has two goals; 1) make enough money to buy a house, and 2) develop a good act. You see, she has no act. She asks Kevin how many minutes are required to be the opening act. He says 20 minutes. She rushes to her closet and gets out the video of her first Johnny Carson appearance. That act was six minutes.

Jackson shakes the mothballs out of her French Maid bustier costume, realizes it’s too small, buys some black bra extenders. She wipes the dust off of her Martin baritone ukulele and puts it in its carry case.

Then, this “has been” goes out on the road! With no act. We watch her journey from city to city throughout America, starting in dives like Andover’s The Comedy Palace and eventually working her way back up to the top – appearing in Vegas on the Strip! We see her ups and downs on the road and at home as she tries to balance motherhood and movie roles, bars and the Bible, fame and obscurity. She cries alone in her hotel room, missing her kids and feeling guilty. She bombs. She meets kind strangers. She makes people laugh. We see the contrast between smoky bars full of drinks and dirty jokes and the pure, innocent world of children and motherhood. We see the conflict between her Christian values and show business.

After five years of hard work we see her achieve her goals. She buys a house on a lake, and has an act she can take anywhere. We also see her romance. She has reunited with her long-suffering high school sweetheart, police helicopter pilot who does not share her passion for the spotlight. He’d rather be in the air chasing bad guys. In the end, she concludes that although both worlds can be rewarding, her family is The Only Show in Town. 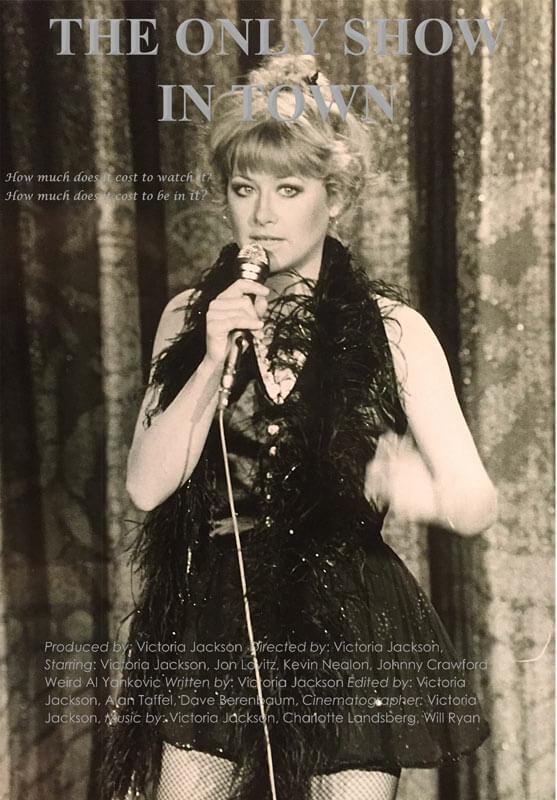